When it comes to special occasion food, few things beat beef fillet. The tenderest of all beef cuts, fillet simply melts in the mouth. Which is why it’s such a good idea to balance it with some crunchy texture in the form of a pangrattata crust.

Pangrattata takes its name from the Italian for breadcrumbs. In its simplest form, it is just stale breadcrumbs toasted in a pan with olive oil and a clove of garlic. The resultant golden tastiness is most often encountered sprinkled over pasta, hence its nickname as the 'poor man’s parmesan'. But there is so much more you can do with pangrattata. Sprinkle it over risotto, over soft fried eggs, over fine green beans, briefly blanched – the options are endless. Or really ramp things up as we’ve done here and use pangrattata to cover a fillet of beef. The addition of Cape Herb & Spice’s Mediterranean Rub elevates this pangrattata to whole new levels of yumminess and it’s so easy to make, perfect for effortless Easter entertaining. 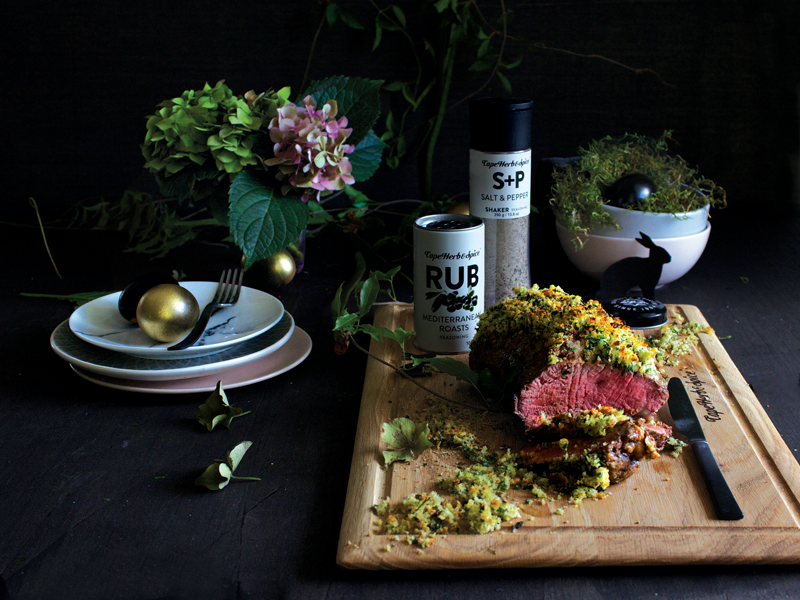 Preheat your oven to 200˚ C. Generously sprinkle a whole fillet of beef with Cape Herb & Spice S&P Shaker Seasoning. Heat a thick-based frying pan and add two tablespoons of olive oil and a large knob of butter. Fry the fillet all around until it starts to caramelise nicely. Transfer it to a roasting pan and pop it in the oven.

Put the breadcrumbs in a food processor along with the bunch of parsley, stalks included, and blitz until the parsley is fine. Add the Cape Herb & Spice Mediterranean Rub with two tablespoons olive oil and pulse briefly to mix through. Once the fillet has been in the oven for 20 minutes, take it out and cover it with the breadcrumb mix. Return to the oven and roast until the fillet is done to your liking and the pangrattata is golden. (For rare fillet, the internal temperature should be 50˚ C; for medium rare, 55˚ C. (Remember that it continues to cook while it rests) To prevent the pangrattata crust coming off when you slice it, cut the fillet in thick steak-like slices. If you would prefer to cut very thin slivers of beef, then rather toast the pangrattata separately on a baking tray in the oven and scatter an artful row of it over the fillet once sliced.

This recipe will serve 6-8 people depending on the size of the fillet you use. 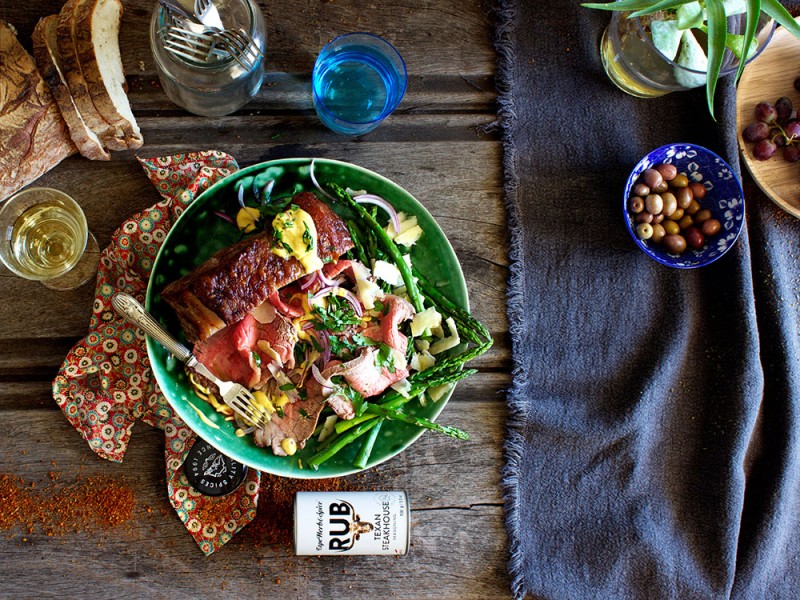 Serving up a generous meaty roast is one of our favourite ways of entertaining a crowd. When it comes to minimum energy/...

Nothing like a perfectly cooked ribeye steak to ensure your tastebuds are fully satisfied. To make it that much mor...

For a seriously tasty family supper that appeals to young and old alike, very few things beat schnitzel. On the eas...